Sir Francis Drake (c.  1540 – 28 January 1596) was an English explorer, sea captain, privateer, slave trader, naval officer, and politician. Drake is best known for his circumnavigation of the world in a single expedition, from 1577 to 1580. This included his incursion into the Pacific Ocean, until then an area of exclusive Spanish interest, and his claim to New Albion for England, an area in what is now the U.S. state of California. His expedition inaugurated an era of conflict with the Spanish on the western coast of the Americas, an area that had previously been largely unexplored by Western shipping. Elizabeth I awarded Drake a knighthood in 1581 which he received on the Golden Hind in Deptford. In the same year he was appointed mayor of Plymouth. As a vice admiral, he was second-in-command of the English fleet in the victorious battle against the Spanish Armada in 1588. After unsuccessfully attacking San Juan, Puerto Rico, he died of dysentery in January 1596. Drake's exploits made him a hero to the English, but his privateering led the Spanish to brand him a pirate, known to them as El Draque. King Philip II of Spain allegedly offered a reward of 20,000 ducats for his capture or death, equivalent to around £6 million (US$8 million) in 2015. 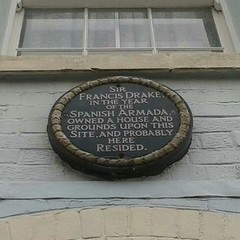 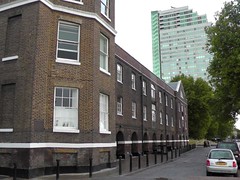 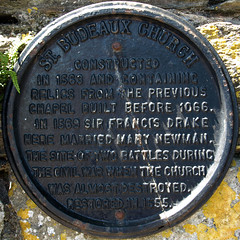 On this site stood Thornhill House which in 1592 was the property of Edmund Parker and ...
Plymouth, United Kingdom 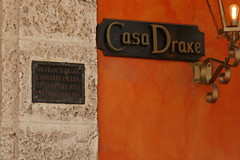 Sir Francis Drake in the year of the Spanish Armada owned a house and ground upon this site, and probably here resided.

Peacock Lane, Plymouth, United Kingdom where they owned a house and probably lived

Sir Francis Drake In 1581 Queen Elizabeth I commanded that Francis Drake's ship, The Golden Hinde, be drawn into a creek near here at Deptford as a perpetual memorial for having "circuited about the whole earth." On 4 April 1581, she banqueted on board the Golden Hind and "consecrated it with great ceremonie, pompe, and magnificence eternally to be remembered." And forthwith knighted Drake on his ship in recognition of the honouyr that he had brought to England by his discoveries and circumnavigation in the years 1577 - 1580. His achievements included discovery of open sea from Atlantic to Pacific below South America: opening of English trade in the Far East: and claim to the Western region of North America for England. Naming it Nova Albion (New England) and thereby linking it with claims to the east coast and encouraging subsequent colonization of the Eastern seaboard. Drake's voyage fostered the principle expressed by the Queen "That the VSE of the sea as of the Ayre is common to all. And that the publique necessitie permits not it should be possessed."

3 Foreshore, London, United Kingdom where they was knighted by Queen Elizabeth I on his ship The Golden Hinde near here in recognition of the honouyr that he had brought to England by his discoveries and circumnavigation in the years 1577 - 1580 (1581)

St Budeaux Church constructed in 1563 and containing relics from the previous chapel built before 1066. In 1569 Sir Francis Drake here married Mary Newman. The site of two battles during the Civil War when the church was almost destroyed. Restored in 1653

The Green, Crownhill Road, Plymouth, United Kingdom where they married

Francis Drake sailed from Plymouth on December 13, 1577, to begin the "Famous Voyage" during which he traversed the Strait of Magellan and discovered Drake passage south of Cape Horn. Drake then sailed the Golden Hinde north and in June 1579 landed in California, he took possession of that region for Queen Elizabeth naming it Nova Albion. He returned to Plymouth September 26, 1580, having circumnavigated the globe. Drake was knighted aboard the Golden Hinde at Deptford in the presence of Queen Elizabeth on April 4, 1581. This plaque was presented August, 1977, by the State of California Sir Francis Drake Commission in commemoration of the Quadricentennial of Drake's voyage around the world.

The Hoe, Plymouth, United Kingdom where they was

Bedford Square, Tavistock, United Kingdom where they was

Tobar an Bháid Drake's Pool The old name, Well of the Boat, was replaced in the 18th century by one relating to Sir Francis Drake , whose ships were said to have hidden here when pursued by a Spanish fleet, in 1588. The Spaniards sailed up Cork Harbour, but missed their prey who who remained unseen here. The Spaniards came out again, Sir Francis stayed for a few days and then left.

Co Cork, Crosshaven, Ireland where they was (1589)