Giuseppe Maria Garibaldi (/ˌɡærɪˈbɔːldi/ GARR-ib-AWL-dee, Italian: [dʒuˈzɛppe ɡariˈbaldi] ; 4 July 1807 – 2 June 1882) was an Italian general, patriot and republican. He contributed to the Italian unification and the creation of the Kingdom of Italy. He is considered to be one of the greatest generals of modern times and one of Italy's "fathers of the fatherland", along with Camillo Benso, Count of Cavour, Victor Emmanuel II of Italy and Giuseppe Mazzini. Garibaldi is also known as the "Hero of the Two Worlds" because of his military enterprises in South America and Europe. Garibaldi was a follower of the Italian nationalist Mazzini and embraced the republican nationalism of the Young Italy movement. He became a supporter of Italian unification under a democratic republican government; however, breaking with Mazzini, he pragmatically allied himself with the monarchist Cavour and Kingdom of Piedmont-Sardinia in the struggle for independence, subordinating his republican ideals to his nationalist ones until Italy was unified. After participating in an uprising in Piedmont, he was sentenced to death, but he escaped by sailing to South America and spent 14 years in exile, taking part in several wars and learning the art of guerrilla warfare. In 1835 he joined the rebels known as the Ragamuffins (Farrapos), in the Ragamuffin War in Brazil, and took up their cause of establishing the Riograndense Republic and later the Catarinense Republic. Garibaldi also became involved in the Uruguayan Civil War, raising an Italian force known as Redshirts and is still celebrated as an important contributor to Uruguay's reconstitution. In 1848, Garibaldi returned to Italy and commanded and fought in military campaigns that eventually led to Italian unification. The provisional government of Milan made him a general and the Minister of War promoted him to General of the Roman Republic in 1849. When the war of independence broke out in April 1859, he led his Hunters of the Alps in the capture of major cities in Lombardy, including Varese and Como, and reached the frontier of South Tyrol; the war ended with the acquisition of Lombardy. The following year, he led the Expedition of the Thousand on behalf of and with the consent of Victor Emmanuel II. The expedition was a success and concluded with the annexation of Sicily, Southern Italy, Marche and Umbria to the Kingdom of Sardinia before the creation of a unified Kingdom of Italy on 17 March 1861. His last military campaign took place during the Franco-Prussian War as commander of the Army of the Vosges. Garibaldi became an international figurehead for national independence and republican ideals, and is considered by the twentieth-century historiography and popular culture as the main Italian national hero. He was showered with admiration and praise by many intellectuals and political figures, including Abraham Lincoln, William Brown, Francesco de Sanctis, Victor Hugo, Alexandre Dumas, George Sand, Charles Dickens, Friedrich Engels and Che Guevara. Historian A. J. P. Taylor called him "the only wholly admirable figure in modern history". In the popular telling of his story, he is associated with the red shirts that his volunteers, the Garibaldini, wore in lieu of a uniform. 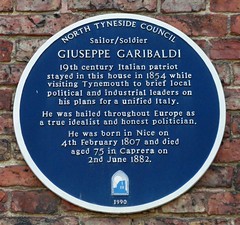 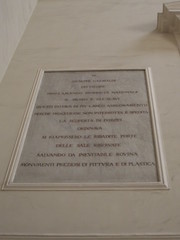 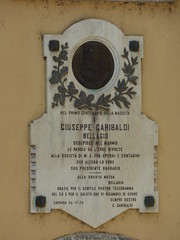 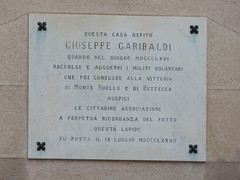 Sailor / soldier Giuseppe Garibaldi 19th century Italian patriot stayed in this house in 1854 while visiting Tynemouth to brief local political and industrial leaders on his plans for a unified Italy. He was hailed throughout Europe as true idealist and honest politician. He was born in Nice on 4th Feb 1807 and died aged 75 in Caprerra on 2nd June 1882.

9 Huntingdon Place, Tynemouth, United Kingdom where they was

English translation: In the first centenary of his birth Giuseppe Garibaldi Bellagio Sculpts from the uprisings hero the company of M. S. between workers and peasants that alters it had Its Honorary President The mutual society Bellagio Thank you for your kind telegram 23 and for the greeting you to your heart always Replacement G. Garibaldi Caprera 07/21/76

Municipio - Via Giuseppe Garibaldi, Bellagio, Italy where they is commemorated

English translation: It hosts this house Giuseppe Garibaldi When in June 1866 The soldiers picked up and agguerri volunteers which then led to Victory day Monte Suello and Bezzecca auspices The citizens' associations a perpetual memorial of the fact this inscription It was laid on 9th July 1882