Theodore Roosevelt Jr. (/ˈroʊzəvɛlt/ ROH-zə-velt; October 27, 1858 – January 6, 1919) was an American statesman, author, explorer, soldier, naturalist, and reformer who served as the 26th President of the United States from 1901 to 1909. As a leader of the Republican Party during this time, he became a driving force for the Progressive Era in the United States in the early 20th century. Born a sickly child with debilitating asthma, Roosevelt successfully overcame his health problems by embracing a strenuous lifestyle. He integrated his exuberant personality, vast range of interests, and world-famous achievements into a "cowboy" persona defined by robust masculinity. Home-schooled, he began a lifelong naturalist avocation before attending Harvard College. His first of many books, The Naval War of 1812 (1882), established his reputation as both a learned historian and as a popular writer. Upon entering politics, he became the leader of the reform faction of Republicans in New York's state legislature. Following the deaths of his wife and mother, he took time to grieve by escaping to the wilderness of the American West and operating a cattle ranch in the Dakotas for a time, before returning East to run unsuccessfully for Mayor of New York City in 1886. He served as Assistant Secretary of the Navy under William McKinley, resigning after one year to serve with the Rough Riders, where he gained national fame for courage during the Spanish–American War. Returning a war hero, he was elected governor of New York in 1898. The state party leadership distrusted him, so they took the lead in moving him to the prestigious but powerless role of vice president as McKinley's running mate in the election of 1900. Roosevelt campaigned vigorously across the country, helping McKinley's re-election in a landslide victory based on a platform of peace, prosperity, and conservatism. Following the assassination of President McKinley in September 1901, Roosevelt, at age 42, succeeded to the office, becoming the youngest United States President in history. Leading his party and country into the Progressive Era, he championed his "Square Deal" domestic policies, promising the average citizen fairness, breaking of trusts, regulation of railroads, and pure food and drugs. Making conservation a top priority, he established a myriad of new national parks, forests, and monuments intended to preserve the nation's natural resources. In foreign policy, he focused on Central America, where he began construction of the Panama Canal. He greatly expanded the United States Navy, and sent the Great White Fleet on a world tour to project the United States' naval power around the globe. His successful efforts to end the Russo-Japanese War won him the 1906 Nobel Peace Prize. Elected in 1904 to a full term, Roosevelt continued to promote progressive policies, but many of his efforts and much of his legislative agenda were eventually blocked in Congress. Roosevelt successfully groomed his close friend, William Howard Taft, to succeed him in the presidency. After leaving office, Roosevelt went on safari in Africa and toured Europe. Returning to the USA, he became frustrated with Taft's approach as his successor. He tried but failed to win the presidential nomination in 1912. Roosevelt founded his own party, the Progressive, so-called "Bull Moose" Party, and called for wide-ranging progressive reforms. The split among Republicans enabled the Democrats to win both the White House and a majority in the Congress in 1912. The Democrats in the South had also gained power by having disenfranchised most blacks (and Republicans) from the political system from 1890 to 1908, fatally weakening the Republican Party across the region, and creating a Solid South dominated by their party alone. Republicans aligned with Taft nationally would control the Republican Party for decades. Frustrated at home, Roosevelt led a two-year expedition in the Amazon Basin, nearly dying of tropical disease. During World War I, he opposed President Woodrow Wilson for keeping the U.S. out of the war against Germany, and offered his military services, which were never summoned. Although planning to run again for president in 1920, Roosevelt suffered deteriorating health and died in early 1919. Roosevelt has consistently been ranked by scholars as one of the greatest U.S. presidents. Historians admire Roosevelt for rooting out corruption in his administration, but are critical of his 1909 libel lawsuits against the World and the News. Large corporate funding to the Republicans in the 1904 election continued to be a source of controversy for Roosevelt during his second term of office and in his 1912 Republican presidential nomination bid. His face was carved into Mount Rushmore alongside those of George Washington, Thomas Jefferson, and Abraham Lincoln. 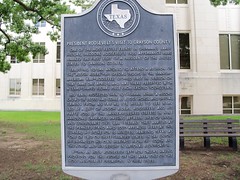 ?, Panhandle, TX, United States where they was

Coliseum. Until 1908, The Annual Fort Worth Fat Stock Show was held in a variety of locations. As interest increased in the event and its educational and promotional values were realized, livestock exhibitors sought a permanent home for the show. The coliseum was constructed in 1907-08 to provide such an exhibition hall. Construction costs were borne by the Swift and Armour Packing Companies, and by the Fort Worth Stock Yards Company, which owned the property. The stock show was held here annually for 34 years. This site has been within three separate cities: North Fort Worth until 1909; Niles City, 1911-23; and in Fort Worth since 1923. It is the birthplace of the indoor rodeo, and the first live radio broadcast of a rodeo was transmitted here on WBAP Radio in 1923. The Coliseum also has served as a place for cultural, educational, religious, social, and civic events. In 1911, former President Theodore Roosevelt spoke here. Numerous Texas Governors, performing artists, grand operas, entertainers and evangelists have appeared here. The great Italian tenor, Enrico Caruso, performed here in 1920. In 1936, the Stock Yards Company sold the coliseum to the City of Fort Worth. Historically it has been an important part of the city and the livestock industry. (1984) #945

123 E. Exchange Ave., Fort Worth, TX, United States where they was

Fort Worth Stockyards Horse and Mule Barns. The Fort Worth Stock Yard Company's wooden horse and mule barns on this site were destroyed by fire on March 14, 1911, opening day of the Feeders and Breeders show (later Southwestern Exposition & Fat Stock Show). The show opened as planned, with former President Theodore Roosevelt giving the opening address. The company announced plans to replace the destroyed barns immediately with new concrete and steel fireproof buildings. Construction was completed in March 1912, and the new barns measuring 540'x350' had a capacity for 3000 animals. With a price tag of $300,000, the buildings were described as among the finest stables in the world. Activity here increased considerably in 1914, at the outbreak of World War I. Horses and mules were needed in great supply by European armies, and agents were sent in droves to Fort Worth to buy stock, spending an estimated $11 million. During that time, Fort Worth was designated the largest horse and mule market in the world. The wide space between the buildings has over the years spawned the nickname "Mule Alley". In recent years the barns have been used for various cultural activities and annual events. Texas Sesquicentennial 1836-1986. #2035

120 E. Exchange St., Fort Worth, TX, United States where they was

First United Methodist Church of Van Alstyne. Outgrowth of Liberty Class, formed 1847 for Bible study and worship, in log cabin of Jim Creager (1.25 mi. S) by the Rev. Joab Biggs, of the Dallas Methodist circuit, and M. F. Cole. In 1855, after a rainstorm that detained quarterly conference delegates to listen to an all-night sermon, the Rev. Y. S. McKinney preached for three weeks and had 60 conversions. The enlarged class moved to Mantua, where it built a frame chapel on the town square and was renamed Mt. Zion Methodist Church. At founding of Van Alstyne on Houston & Texas Central Railroad in 1873, Mt. Zion moved its building into town, to a site now in Van Alstyne Cemetery. By 1890 membership exceeded 400. The congregation in 1893 moved again, erecting a larger building at Waco and Jefferson streets, and changing name to First Methodist Church. In this sanctuary in 1894 there was organized the first district Epworth League of the Southern Methodist Church. Here in 1912 ex-president Theodore Roosevelt gave an address, and in 1917 one of Texas' earliest Boy Scout troops was formed. Present sanctuary was completed and dedicated in 1917, with dedicatory sermon given by the Rev. Sam R. Hay. The present name was given after a national ecumenical accord was reached in 1968. Incise on back: This historical marker given to the glory of God by Mr. and Mrs. Rea A. Nunnallee. #7368

President T. Roosevelt's Visit to Grayson County. One of the most festive events in Sherman's early history, Theodore Roosevelt's 1905 appearance here marked the first visit of a president of the United States to Grayson County. Traveling to San Antonio to attend a reunion of the "Rough-Riders" -- his special troops in the Spanish-American War -- Roosevelt stopped first in Denison on that same day, April 5, and was there presented with a Texas-shaped floral piece from excited youngsters. His train proceeded then to Sherman, where a record crowd of 35,000 had come by buggy, horse, and special trains from as far away as 175 miles to see him. Led by a unit of Rough Riders, Roosevelt and his party rode up the banner-decked streets in nine handsome carriages. Passing between lines of Union and Confederate Civil War veterans, they arrived at the speaker's stand amid loud applause. Here (at this corner) he spoke for 15 minutes, praising Texas as "one of two or three greatest states in the Union". He emphasized his own heritage from the south and the north and his delight in national reunification. Within an hour Roosevelt left for Dallas, having provided for the people of this area one of the most memorable occasions in their lives. #11527

Rev. John J. Curran (1859-1936). Founding pastor of Holy Savior Parish in 1895. Known as the Labor Priest, he championed the workers' cause and was instrumental in settling the Anthracite Strike of 1902. He was a friend of Theodore Roosevelt, who visited here often.