Elm Hill, Norwich is a historic cobbled lane in Norwich, Norfolk with many buildings dating back to the Tudor period.It is a famous Norwich landmark and features the Briton's Arms coffee house, The Stranger's Club, The Tea House (in Wrights Court) and the Dormouse Bookshop. It has been used as a location for television and film productions, most recently for the 2007 film Stardust. 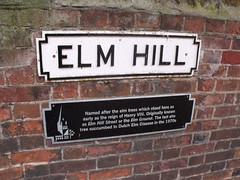 Elm Hill Named after the elm trees which stood here as early as the reign of Henry VIII. Originally known as Elm Hill Street or the Elm Ground. The last elm tree succumbed to Dutch Elm Disease in the 1970s