Randolph Adolphus Turpin (7 June 1928 – 17 May 1966), better known as Randy Turpin, was a British boxer in the 1940s and 1950s. In 1951 he became world middleweight champion when he defeated Sugar Ray Robinson. He was inducted into the International Boxing Hall of Fame in 2001. 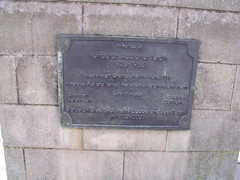 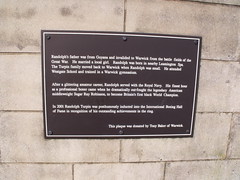 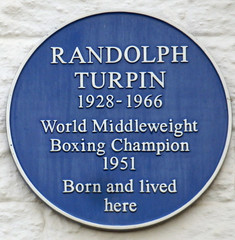 In honour of Randolph Adolphus Turpin (1928-1966) Middleweight Champion of the World 1951. In Palace, Pub and Parlour, the Whole of Britain Held it's Breath. Celer Et Audax.

Market Place, Warwick, United Kingdom where they lived near

Randolph's father was from Guyana and invalided to Warwick from the battle fields of the Great War. He married a local girl. Randolph was born in nearby Leamington Spa. The Turpin family moved back to Warwick when Randolph was small. He attended Westgate School and trained in a Warwick gymnasium. After a glittering amateur career, Randolph served with the Royal Navy. His finest hour as a professional boxer came when he dramatically out-fought the legendary American middleweight Sugar Ray Robinson, to become Britain's first black World Champion. In 2001 Randolph Turpin was posthumously inducted into the International Boxing Hall of Fame in recognition of his outstanding achievements in the ring.

Market Place, Warwick, United Kingdom where they lived near

6 Willes Road, Leamington Spa, United Kingdom where they was born (1928) and lived