woman, mystic, author of Revelations of Divine Love, and anchoress (from 1373)

Julian of Norwich (1343 – after 1416), also known as Juliana of Norwich, Dame Julian or Mother Julian, was an English mystic and anchoress of the Middle Ages. Her writings, now known as Revelations of Divine Love, are the earliest surviving English language works by a woman, although it is possible that some anonymous works may have had female authors. They are also the only surviving English language works by an anchoress. Both the Roman Catholic Church and the Anglican communion regard Julian as a saint. Julian lived in the English city of Norwich, an important centre for commerce that also had a vibrant religious life. During her lifetime, the city suffered the devastating effects of the Black Death of 1348–1350, the Peasants' Revolt (which affected large parts of England in 1381), and the suppression of the Lollards. In 1373, aged 30 and so seriously ill she thought she was on her deathbed, Julian received a series of visions or shewings of the Passion of Christ. She recovered from her illness and wrote two versions of her experiences, the earlier one being completed soon after her recovery—a much longer version, today known as the Long Text, was written many years later. Julian lived in permanent seclusion as an anchoress in her cell, which was attached to St Julian's Church, Norwich. Four wills are known in which sums were bequeathed to a Norwich anchoress named Julian, and an account by the celebrated mystic Margery Kempe exists which provides evidence of counsel Kempe was given by the anchoress. Details of Julian's family, education, or of her life before becoming an anchoress are not known; it is unclear whether her actual name was Julian. Preferring to write anonymously, and seeking isolation from the world, she was nevertheless influential in her lifetime. While her writings were carefully preserved, the Reformation prevented their publication in print. The Long Text was first published in 1670 by the Benedictine monk Serenus de Cressy, reissued by George Hargreaves Parker in 1843, and published in a modernised version in 1864. Julian's writings emerged from obscurity in 1901 when a manuscript in the British Museum was transcribed and published with notes by Grace Warrack; many translations have been made since. Julian is today considered to be an important Christian mystic and theologian. 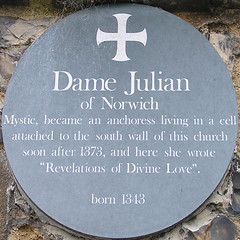 Dame Julian of Norwich Mystic, became an anchoress living in a cell attached to the south wall of this church soon after 1373, and here she wrote "Revelations of Divine Love". born 1343