Sir Joseph Austen Chamberlain KG (16 October 1863 – 16 March 1937) was a British statesman, son of Joseph Chamberlain and older half-brother of Prime Minister Neville Chamberlain. He served as Chancellor of the Exchequer (twice) and was briefly Conservative Party leader before serving as Foreign Secretary. Brought up to be the political heir of his father, whom he physically resembled, he was elected to Parliament as a Liberal Unionist at a by-election in 1892, and held office in the Unionist coalition governments of 1895–1905, remaining in the Cabinet as Chancellor of the Exchequer (1903–05) after his father resigned in 1903 to campaign for Tariff Reform. After his father's disabling stroke in 1906 Austen became the leading tariff reformer in the House of Commons. Late in 1911 he and Walter Long were due to fight one another for the leadership of the Conservative Party (in succession to Arthur Balfour), but both withdrew in favour of Bonar Law rather than risk a party split on a close result. Chamberlain returned to office in H. H. Asquith's wartime coalition government in May 1915, as Secretary of State for India, but resigned to take responsibility for the disastrous Kut Campaign. He again returned to office in David Lloyd George's coalition government, once again serving as Chancellor of the Exchequer. He then served as Conservative Party leader in the Commons (1921–2), before resigning after the Carlton Club meeting voted to end the Lloyd George Coalition. Like many leading coalitionists, he did not hold office in the Conservative governments of 1922–4. By now regarded as an elder statesman, he served an important term as Foreign Secretary in Stanley Baldwin's Second Government (1924–9), during which he negotiated the Locarno Pact (1925), aimed at preventing war between France and Germany, for which he was awarded the Nobel Peace Prize. He last held office as First Lord of the Admiralty in 1931. He was one of the few MPs supporting Winston Churchill's appeals for rearmament against the German threat in the 1930s, and remained an active backbench MP until his death in 1937. 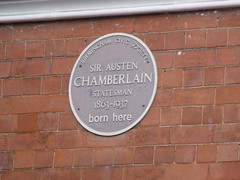