William Henry Pratt (23 November 1887 – 2 February 1969), better known by his stage name Boris Karloff (/ˈkɑːrlɒf/), was an English actor who starred as Frankenstein's monster in the horror film Frankenstein (1931), which established him as a horror icon. He reprised the role in Bride of Frankenstein (1935) and Son of Frankenstein (1939). Karloff also appeared as Imhotep in The Mummy (1932), and voiced the Grinch, as well as narrating the animated television special of Dr. Seuss' How the Grinch Stole Christmas! (1966), which won him a Grammy Award. Aside from his numerous film roles, Karloff acted in many live stage plays and appeared on dozens of radio and television programs as well. For his contribution to film and television, Karloff was awarded two stars on the Hollywood Walk of Fame on 8 February 1960. 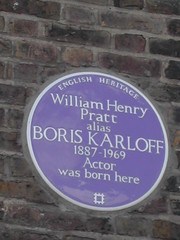 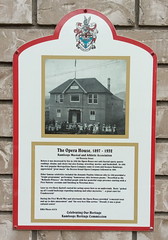 The Opera House, 1897-1932, Kamloops Musical and Athletic Association. Before it was destroyed by fire in 1932 the Opera House not only hosted opera, poetry readings, drama, and choirs but also boxing, wrestling, movies, and basketball. In 1899 the very popular Metropolitan Opera Company came to town and because Kamloops appreciated “great music” the Boston Grand Opera Company followed in 1909. Other famous celebrities included the dynamic Pauline Johnson who in 1902 provided a “bright programme” performing “humourous skits between poems.” Described as the “Mohawk-Princess” she thrilled people with her powerful stage presence starting with a First Nations’ costume and finishing in Victorian dress. Later in 1910 Boris Karloff started his acting career here as an understudy. Boris “picked up all I could backstage regarding makeup and other mysteries,” - a great start for Frankenstein! During the First World War and afterwards the Opera House provided “a musical treat and up-to-date amusement” and “the very best film service.” Overall, it was a great cultural centre!

168 Victoria Street, Kamloops, BC, Canada where they was