Joseph Rowntree (24 May 1836 – 24 February 1925) was an English Quaker philanthropist and businessman from York. Rowntree is perhaps best known for being a champion of social reform, partner and friend of Charles Booth, and his time as a chocolatier at family business Rowntree's, one of the most important in Britain. Even as a powerful businessman, he was deeply interested in improving the quality of life of his employees; this led to him becoming a philanthropist, pursuing many charitable causes. In 1904 he created three trusts, the Joseph Rowntree Village Trust (JRVT) which was originally set up to build and manage the garden village of New Earswick, the Joseph Rowntree Charitable Trust (JRCT) and the Joseph Rowntree Social Services Trust (JRSST). The latter two were both set up to effect social reform, the difference between them being that whereas the Charitable Trust was set up as a charity, the Social Services Trust was set up as a limited company so that if necessary it would be able to undertake social and political work not legally allowed by a charitable Trust. He suggested that only the JRVT would be permanent but in fact all the trusts are still in existence although the Social Services Trust has changed its name to the Joseph Rowntree Reform Trust and with the separation of the Joseph Rowntree Housing Trust from the Village Trust in 1968, there are now four trusts that exist today. 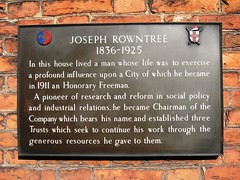 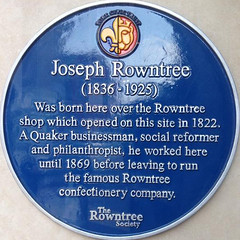 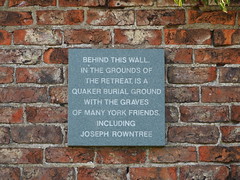 Joseph Rowntree 1836-1925. In this house lived a man whose life was to exercise a profound influence upon a City of which he became in 1911 an Honorary Freeman. A pioneer of research and reform in social policy and industrial relations, he became Chairman of the Company which bears his name, and established three Trusts which seek to continue his work through the generous resources he gave to them.

Joseph Rowntree (1836-1925) was born here over the Rowntree shop which opened on this site in 1822. A Quaker businessman, social reformer and philanthropist, he worked here until 1869 before leaving to run the famous Rowntree confectionery company.

Behind this wall, in the grounds of the Retreat, is a Quaker burial ground with the graves of many York Friends, including Joseph Rowntree.

Walmgate Stray, York, United Kingdom where they was buried (1925)