Laurence Sterne (24 November 1713 – 18 March 1768), an Anglo-Irish novelist and Anglican cleric, wrote the novels The Life and Opinions of Tristram Shandy, Gentleman and A Sentimental Journey Through France and Italy, published sermons and memoirs, and indulged in local politics. He grew up in a military family travelling mainly in Ireland but briefly in England. An uncle paid for Sterne to attend Hipperholme Grammar School in the West Riding of Yorkshire, as Sterne's father was ordered to Jamaica, where he died of malaria some years later. He attended Jesus College, Cambridge on a sizarship, gaining bachelor's and master's degrees. While Vicar of Sutton-on-the-Forest, Yorkshire, he married Elizabeth Lumley in 1741. His ecclesiastical satire A Political Romance infuriated the church and was burnt. With his new talent for writing, he published early volumes of his best-known novel, The Life and Opinions of Tristram Shandy, Gentleman. Sterne travelled to France to find relief from persistent tuberculosis, documenting his travels in A Sentimental Journey Through France and Italy, published weeks before his death. His posthumous Journal to Eliza addresses Eliza Draper, for whom he had romantic feelings. Sterne died in 1768 and was buried in the yard of St George's, Hanover Square. His body was said to have been stolen after burial and sold to anatomists at Cambridge University, but recognised and reinterred. His ostensible skull was found in the churchyard and transferred to Coxwold in 1969 by the Laurence Sterne Trust. 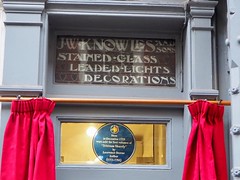 Thirsk Bank, North Yorkshire, YO61 4AD, Coxwold, United Kingdom where they was

35 Stonegate, York, United Kingdom where they was

West Gate, Clonmel, Ireland where they was born near (1713)