Wyatt Berry Stapp Earp (March 19, 1848 – January 13, 1929) was an American Old West gambler, a deputy sheriff in Pima County, and deputy town marshal in Tombstone, Arizona Territory, who took part in the Gunfight at the O.K. Corral, during which lawmen killed three outlaw cowboys. He is often regarded as the central figure in the shootout in Tombstone, although his brother Virgil was Tombstone city marshal and Deputy U.S. Marshal that day, and had far more experience as a sheriff, constable, marshal, and soldier in combat. Earp lived a restless life. He was at different times a constable, city policeman, county sheriff, Deputy U.S. Marshal, teamster, buffalo hunter, bouncer, saloon-keeper, gambler, brothel keeper, miner, and boxing referee. Earp spent his early life in Iowa. In 1870, Earp married his first wife, Urilla Sutherland Earp, who contracted typhoid fever and died shortly before their first child was to be born. Within the next two years Earp was arrested, sued twice, escaped from jail, then was arrested three more times for "keeping and being found in a house of ill-fame". He landed in the cattle boomtown of Wichita, Kansas, where he became a deputy city marshal for one year and developed a solid reputation as a lawman. In 1876, he followed his brother James to Dodge City, Kansas, where he became an assistant city marshal. In winter 1878, he went to Texas to track down an outlaw and met John "Doc" Holliday, whom Earp later credited with saving his life. Earp moved constantly throughout his life from one boomtown to another. He left Dodge City in 1879 and moved to Tombstone with his brothers James and Virgil, where a silver boom was underway. There, the Earps clashed with a loose federation of outlaws known as the Cowboys. Wyatt, Virgil, and their younger brother Morgan held various law enforcement positions that put them in conflict with Tom and Frank McLaury, and Ike and Billy Clanton, who threatened on several occasions to kill the Earps. The conflict escalated over the next year, culminating on October 26, 1881 in the Gunfight at the O.K. Corral, in which the Earps and Holliday killed three of the Cowboys. In the next five months, Virgil was ambushed and maimed, and Morgan was assassinated. Pursuing a vendetta, Wyatt, his brother Warren, Holliday, and others formed a federal posse that killed three of the Cowboys whom they thought responsible. Wyatt was never wounded in any of the gunfights, unlike his brothers Virgil and James or Doc Holliday, which only added to his mystique after his death. Earp was a lifelong gambler and was always looking for a quick way to make money. After leaving Tombstone, Earp went to San Francisco where he reunited with Josephine Earp. She became his common-law wife. They joined a gold rush to Eagle City, Idaho, where they owned mining interests and a saloon. They left there to race horses and open a saloon during a real estate boom in San Diego, California. Back in San Francisco, Wyatt raced horses again, but his reputation suffered irreparably when he refereed the Fitzsimmons-Sharkey boxing match and called a foul that led many to believe that he fixed the fight. They moved briefly to Yuma, Arizona before they joined the Alaskan Gold Rush to Nome, Alaska. They opened the biggest saloon in town and made a large sum of money. Returning to the lower 48, they opened another saloon in Tonopah, Nevada, the site of a new gold find. In about 1911, Earp began working several mining claims in Vidal, California, retiring in the hot summers with Josephine to Los Angeles. When Earp died in 1929, he was well known for his notorious handling of the Fitzsimmons-Sharkey fight along with the O.K. Corral gun fight. An extremely flattering, largely fictionalized biography was published in 1931 after his death, becoming a bestseller and creating his reputation as a fearless lawman. Since then, Wyatt Earp has been the subject of and model for numerous films, TV shows, biographies, and works of fiction that have increased his mystique. Earp's modern-day reputation is that of the Old West's "toughest and deadliest gunman of his day." Until the book was published, Earp had a dubious reputation as a sometime Western lawman and gunfighter who had been arrested nine times and left more than one town with warrants for his arrest still outstanding. In modern times, Wyatt Earp has become synonymous with the stereotypical image of the Western lawman, and is a symbol of American frontier justice.

Wyatt Earp plaque marks the location of the house in which Earp spent the last years of...
Los Angeles, CA, United States 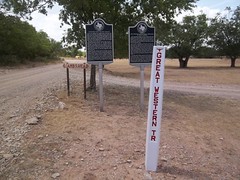 Wyatt Berry Stapp Earp (1848-1929) Josephine Sarah Marcus Earp (1861-1944) Earp Cottage Vidal, California. The legendary lawman, gun-fighter, gambler, businessman and miner along with his wife Josephine inhabited this "dream-come-true" cottage from 1925-1928. During the fall, winter and spring months while he worked his "happy days" mines in the Whipple Mountains a few miles north of this site. This is the only permanent residence they owned in their long lives together. Their ashes are buried in the hills of Eternity Memorial Park, Colma, California.

Wyatt Earp was born in Illinois March 19, 1848. In 1864 he came west with his family, settling near San Bernardino. He later served as lawman in Wichita and Dodge City, then came to Tombstone in 1879. After the gunfight at the O.K. Corral in 1881, he fled Arizona to avoid prosecution. He frequented the western boom camps, including Alaska, and in later years retired on income from Kern County Oil and the Happy Day Gold Mine group in the nearby Whipple Mountains. He and his wife Josephine spent their winters here for over two decades. He died peacefully in Los Angles January 13, 1929. soon after, this little community, formerly Drennan, was renamed in his honor when Earp Post Office was established in 1930. He is buried next to his wife, who died in 1944, in Colma, California.

Wyatt Earp called to Dodge City in 1876 and established law and order in a few years. He did the same thing for other cities and became known as the best law officer in the West. He was a quiet and decent man and caused considerable publicity for Dodge City. Wyatt Earp died in Cailfornia at the age of 81 in 1921.

Frontier Town of Fort Griffin. In the 19th century, the U.S. government established forts along Texas' frontier to protect pioneers. By the early 1850s, Col. Jesse Stem farmed along the Clear Fork of the Brazos River, and Thomas Lambshead established his Clear Fork Farm. As others moved to the area, troops at Camp Cooper in present-day Throckmorton County, including then-Lt. Col. Robert E. Lee, provided military defense. Camp Cooper closed at the start of the Civil War in 1861. After the war, the U.S. Army established Camp Wilson, later renamed Fort Griffin, near this site in 1867. Fort Griffin sat on the high ground above the river. A settlement developed between it and the water's edge. The town, known also as "The Flat," included merchants, cattlemen and their families. Its permanent populace supported a newspaper, the Fort Griffin Echo, as well as an academy, Masonic lodge and several stores and saloons. A rough element of cowboys, gamblers and renegades mixed with black and white troops to form a lawless scene. Among those attracted to the town were Doc Holliday, Wyatt Earp, Lottie Deno, Big Nose Kate, Hurricane Bill and Hurricane Minnie. Fort Griffin was a stop for buffalo hide trade, and hides awaiting shipment crowded town lots. Located along the Western cattle trail, it included immigrant residents from several countries. Due to the distance from governmental authority, area residents formed Shackelford County in 1874. The town's population steadily declined after Albany became the county seat and the terminus of the Texas Central Railroad. Notable local businesses included the Beehive Saloon, The Conrad and Rath Store, the Glesk Boot Shop and the Occidental Hotel. The fort closed in 1881, but elements of the town remained in operation into the mid-20th century. The school consolidated with the Albany district in 1942. (2004) #13028