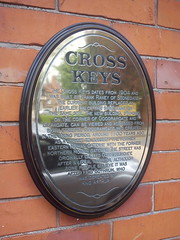 The Cross Keys dates from 1904 and was built by Frank Raney of Stonegate. The current building replaced an earlier inn of the same name on the same site. The new building, standing on the corner of Goodramgate and Deangate, can be viewed and accessed from both streets. Goodramgate was created in the Viking period, around 1100 years ago, as a street to connect the former Eastern Roman gateway with the former Northern Roman gateway. The street was originally called Gutherumgate after a local warrior, though some people believe it was after King Guthrum, who was defeated by King Arthur.