Umberto I (Italian: Umberto Rainerio Carlo Emanuele Giovanni Maria Ferdinando Eugenio di Savoia; 14 March 1844 – 29 July 1900), nicknamed the Good (Italian: il Buono), was the King of Italy from 9 January 1878 until his assassination on 29 July 1900. Umberto's reign saw Italy attempt colonial expansion into the Horn of Africa, successfully gaining Eritrea and Somalia despite being defeated by Abyssinia at the Battle of Adwa in 1896. In 1882, he approved the Triple Alliance with the German Empire and Austria-Hungary. He was deeply loathed in leftist circles because of his conservatism and support of the Bava Beccaris massacre in Milan. He was especially hated by anarchists, who attempted to assassinate him during the first year of his reign. He was killed by another anarchist, Gaetano Bresci, two years after the Bava-Beccaris massacre. 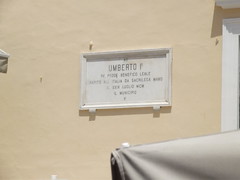 Municipo, Piazza Umberto I, Capri, Italy where they was assassinated (1900)