Diana, Princess of Wales (born Diana Frances Spencer; 1 July 1961 – 31 August 1997), was a member of the British royal family. She was the first wife of Charles, Prince of Wales—the heir apparent to the British throne—and mother of Prince William and Prince Harry. Diana's activism and glamour made her an international icon and earned her enduring popularity as well as unprecedented public scrutiny, exacerbated by her tumultuous private life. Diana was born into the British nobility and grew up close to the royal family on their Sandringham estate. In 1981, while working as a nursery teacher's assistant, she became engaged to Prince Charles, the eldest son of Queen Elizabeth II. Their wedding took place at St Paul's Cathedral in 1981 and made her Princess of Wales, a role in which she was enthusiastically received by the public. They had two sons, William and Harry, who were then second and third in the line of succession to the British throne. Diana's marriage to Charles suffered due to their incompatibility and extramarital affairs. They separated in 1992, soon after the breakdown of their relationship became public knowledge. Their marital difficulties became increasingly publicised, and they divorced in 1996. As Princess of Wales, Diana undertook royal duties on behalf of the Queen and represented her at functions across the Commonwealth realms. She was celebrated in the media for her unconventional approach to charity work. Her patronages initially centred on children and the elderly but she later became known for her involvement in two particular campaigns, that involving the social attitudes towards and the acceptance of AIDS patients, and the campaign promoted through the International Red Cross for the removal of landmines. She also raised awareness and advocated for ways to help people affected with cancer and mental illness. The Princess was initially noted for her shyness, but her charisma and friendliness endeared her to the public and helped her reputation survive the acrimonious collapse of her marriage. Considered to be very photogenic, she was a leader of fashion in the 1980s and 1990s. Diana's death in a car crash in Paris led to extensive public mourning and global media attention. Her legacy has had a deep impact on the royal family and British society. 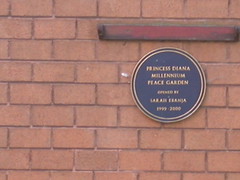 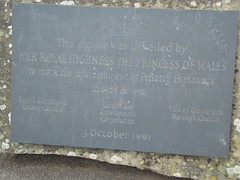 22-31 Templeton Close, London, United Kingdom where they is commemorated

Italian Gardens - The Esplanade, Penarth, United Kingdom where they unveiled

AITH LIFEBOAT PIER This pier was opened by H.R.H. PRINCE OF WALES on the occasion of the naming of R.N.L.B "SNOLDA" by H.R.H PRINCESS OF WALES on 29th July 1986

Pier, Aith, Shetland, United Kingdom where they was