Prince Henry, Duke of Cumberland and Strathearn (Henry Frederick; 7 November 1745 – 18 September 1790) was the sixth child and fourth son of Frederick, Prince of Wales, and Princess Augusta of Saxe-Gotha, and a younger brother of George III. His 1771 marriage to a commoner against the King's wishes prompted the Royal Marriages Act of 1772. 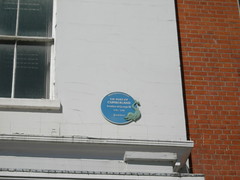 ?, Margate, United Kingdom where they lived