James Ramsay MacDonald FRS (né James McDonald Ramsay; 12 October 1866 – 9 November 1937) was the first Prime Minister of the United Kingdom who belonged to the Labour Party, leading minority Labour governments for nine months in 1924 and again between 1929–1931. From 1931 to 1935, he headed a National Government dominated by the Conservative Party and supported by only a few Labour members. MacDonald was expelled from the Labour Party as a result. MacDonald, along with Keir Hardie and Arthur Henderson, was one of the three principal founders of the Labour Party in 1900. He was chairman of the Labour MPs before 1914 and, after an eclipse in his career caused by his opposition to the First World War, he was Leader of the Labour Party from 1922. The second Labour Government (1929–1931) was dominated by the Great Depression. He formed the National Government to carry out spending cuts to defend the gold standard, but it had to be abandoned after the Invergordon Mutiny, and he called a general election in 1931 seeking a "doctor's mandate" to fix the economy. The National coalition won an overwhelming landslide and the Labour Party was reduced to a rump of around 50 seats in the House of Commons. His health deteriorated and he stood down as Prime Minister in 1935, remaining as Lord President of the Council until retiring in 1937. He died later that year. MacDonald's speeches, pamphlets and books made him an important theoretician. Historian John Shepherd states that "MacDonald's natural gifts of an imposing presence, handsome features and a persuasive oratory delivered with an arresting Highlands accent made him the iconic Labour leader". After 1931, MacDonald was repeatedly and bitterly denounced by the Labour movement as a traitor to its cause. Since the 1960s, historians have defended his reputation, emphasising his earlier role in building up the Labour Party, dealing with the Great Depression, and as a forerunner of the political realignments of the 1990s and 2000s. 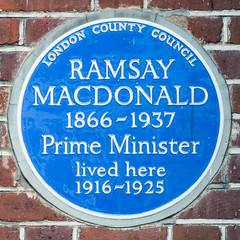 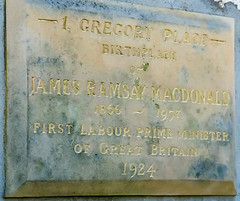 1 Gregory Place, Lossiemouth, United Kingdom where they was