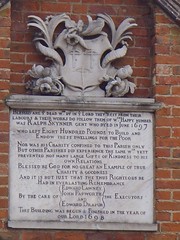 Bancoft St , Hitchin, United Kingdom where they executed a will