'The Cheeky Chappie' and pure gold of music hall

Thomas Henry Sargent (21 November 1894 – 7 May 1963), known professionally by his stage name Max Miller and billed as The Cheeky Chappie, was an English comedian who was widely regarded as the greatest stand-up of his generation. He came from humble beginnings and left school at the age of 12. At the outbreak of the First World War, he volunteered for the army. During his time in the forces, he started a troupe concert party. On leaving the army, he took up work as a light comedian, dancer, and singer. He toured extensively, appearing in variety, revues and by the early 1930s reached the top of the bill in the large music halls including the London Palladium.He recorded many songs, some of which he wrote. He appeared frequently on radio, but television did not really suit his style. He appeared and starred in 14 feature films. He was known for his flamboyant suits, his wicked charm, and his risqué jokes which often got him into trouble with the censors. He made his last recording in January 1963 and died four months later. 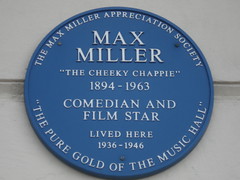 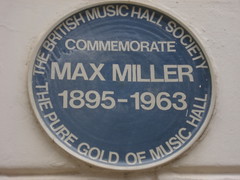 Ashcroft near Kingston Lane, Shoreham-by-sea, United Kingdom where they lived