Princess Helena of the United Kingdom VA CI GBE RRC (Helena Augusta Victoria; 25 May 1846 – 9 June 1923), later Princess Christian of Schleswig-Holstein, was the third daughter and fifth child of Queen Victoria and Prince Albert. Helena was educated by private tutors chosen by her father and his close friend and adviser, Baron Stockmar. Her childhood was spent with her parents, travelling between a variety of royal residences in Britain. The intimate atmosphere of the royal court came to an end on 14 December 1861, when her father died and her mother entered a period of intense mourning. Afterwards, in the early 1860s, Helena began a flirtation with Prince Albert's German librarian, Carl Ruland. Although the nature of the relationship is largely unknown, Helena's romantic letters to Ruland survive. After her mother discovered the flirtations, in 1863, she dismissed Ruland, who returned to his native Germany. Three years later, on 5 July 1866, Helena married the impoverished Prince Christian of Schleswig-Holstein. The couple remained in Britain, in calling distance of the queen, who liked to have her daughters nearby. Helena, along with her youngest sister, Princess Beatrice, became the queen's unofficial secretary. However, after Queen Victoria's death on 22 January 1901, Helena saw relatively little of her surviving siblings. Helena was the most active member of the royal family, carrying out an extensive programme of royal engagements. She was also an active patron of charities, and was one of the founding members of the British Red Cross. She was founding president of the Royal School of Needlework, and president of the Workhouse Infirmary Nursing Association and the Royal British Nurses' Association. As president of the latter, she was a strong supporter of nurse registration against the advice of Florence Nightingale. In 1916 she became the first member of her family to celebrate her 50th wedding anniversary, but her husband died a year later. Helena outlived him by six years, dying aged 77 in 1923. 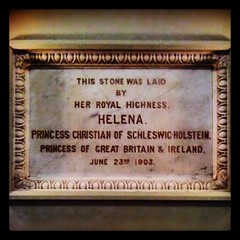 This stone was laid by Her Royal Highness "Helena" Princess Christian of Schleswicholstein. Princess of Great Britain & Ireland. June 23rd 1903

145 Alcester Street, Birmingham, United Kingdom where they was