Joseph Lister, Baron Lister of Lyme Regis OM, PC, PRS, FRCSE, FRCPGlas (5 April 1827 – 10 February 1912), was a British surgeon, medical scientist, experimental pathologist and a pioneer of antiseptic surgery and preventative medicine. Joseph Lister revolutionised the craft of surgery in the same manner that John Hunter revolutionised the science of surgery. From a technical viewpoint, Lister was not an exceptional surgeon, but his research into bacteriology and infection in wounds, raised his operative technique to a new plane where his observations, deductions and practices revolutionised surgery throughout the world. Lister's contribution to medicine was two-fold. He promoted the idea of sterile surgery while working as a surgeon at the Glasgow Royal Infirmary by successfully introducing phenol (then known as carbolic acid) to sterilise surgical instruments, the patients skin, sutures and the surgeons hands. However, his most important contribution was recognising the key principle the underlay the change in surgical practice, namely converting a chance observation into a meaningful application of the scientific principles proposed by Louis Pasteur. Lister's work led to a reduction in post-operative infections and made surgery safer for patients, distinguishing him as the "father of modern surgery". 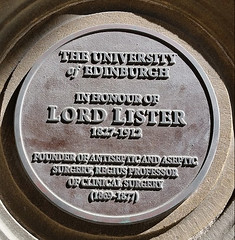