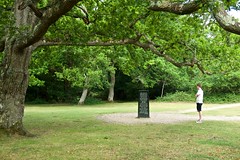 Here stood the Oak Tree on which an arrow shot by Sir Walter Tyrrell at a stag. glanced and struck King William the Second, surnamed Rufus, on the breast, of which he instantly died, on the second day of August, anon 1100. King William the Second, surnamed Rufus being slain, as before related, was laid in a cart, belonging to one Purkis, and drawn from hence, to Winchester, and buried in the Cathedral Church of that city. That the spot where an event so memorable might not hereafter be forgotten, the enclosed stone was set up by John Lord Delaware who had seen the tree growing in this place. This stone having been much mutilated, and the inscriptions on each of its three sides defaced this more durable memorial with the original inscriptions was erected in the year 1841, by Wm Sturges Bourne Warden

New Forest, Lyndhurst, United Kingdom where they was