Robert Louis Balfour Stevenson (13 November 1850 – 3 December 1894) was a Scottish novelist, poet, essayist, and travel writer. His most famous works are Treasure Island, Kidnapped, Strange Case of Dr Jekyll and Mr Hyde and A Child's Garden of Verses. A literary celebrity during his lifetime, Stevenson now ranks among the 26 most translated authors in the world. His works have been admired by many other writers, including Jorge Luis Borges, Bertolt Brecht, Marcel Proust, Arthur Conan Doyle, Henry James, Cesare Pavese, Emilio Salgari, Ernest Hemingway, Rudyard Kipling, Jack London, Vladimir Nabokov, J. M. Barrie, and G. K. Chesterton, who said of him that he "seemed to pick the right word up on the point of his pen, like a man playing spillikins." 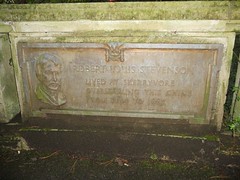 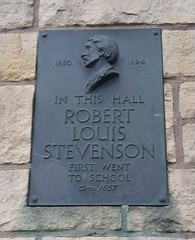 Robert Louis Stevenson a frequent visitor to the Spa from his childhood (1853) until a ...
Bridge of Allan, United Kingdom

R. L. Stevenson. Poet and Novelist. Stayed at this hotel on his visit to Cockermout...
Cockermouth, United Kingdom

Here dwelt Robert Louis Stevenson during the winter 1887-1888 "I was walking in the ver...
Saranac Lake, NY, United States 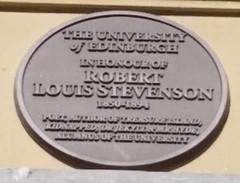 Alum Chine, near to 61 Alum Chine Road, Bournemouth, United Kingdom where they lived

Robert Louis Stevenson a frequent visitor to the Spa from his childhood (1853) until a university student (1865). He stayed with his family at many hotels and lodging houses, deriving inspiration from the area for his later writings. Stevenson's Cave on the riverside walk to Dunblane was a favourite haunt and may have acted as the model for Ben Gunn's cave in "Treasure Island"

R. L. Stevenson. Poet and Novelist. Stayed at this hotel on his visit to Cockermouth in 1871.

Here dwelt Robert Louis Stevenson during the winter 1887-1888 "I was walking in the verandah of a small house outside the hamlet of Saranac. It was winter; the night was very dark. The air clear and cold and sweet with purity of forests. For the making of a story here were fine conditions. "COME, SAID I TO MY ENGINE, LET US MAKE A TALE." The Genesis of Ballantrae. Here he wrote "The Master of Ballantrae", "A Christmas Sermon," "The Lantern Bearers", "Pulvis et Umbra," "Beggars" "Gentlemen", "A Chapter on Dreams.”

8 Howard Place , Edinburgh, United Kingdom where they was born (1850)