Alfonso XIII (17 May 1886 – 28 February 1941), also known as El Africano or the African, was King of Spain from 1886 until the proclamation of the Second Republic in 1931. He was a monarch from birth as his father, Alfonso XII, had died the previous year. Alfonso's mother, Maria Christina of Austria, served as regent until he assumed full powers on his sixteenth birthday in 1902. During Alfonso's reign of the Kingdom of Spain, the country experienced four major problems that contributed to the end of the liberal monarchy: the lack of real political representation of broad social groups; the poor situation of the popular classes, especially peasants; problems arising from the Rif War; and Catalan nationalism. The political and social turbulence that began with the Spanish–American War prevented the turnaround parties from establishing a true liberal democracy, which led to the establishment of the dictatorship of Miguel Primo de Rivera. With the political failure of the dictatorship, Alfonso impelled a return to the democratic normality with the intention of regenerating the regime. Nevertheless, it was abandoned by all political classes, as they felt betrayed by the King's support of the dictatorship of Primo de Rivera. He left Spain voluntarily after the municipal elections of April 1931, which were taken as a plebiscite on abolishing the monarchy. Alfonso was nicknamed "the Royal Knight of Charity" for his unprecedented work with the European War Office during World War I. For this great humanitarian endeavour, he was nominated to the Nobel Peace Prize in 1917, and came close to receiving the award, but this was ultimately won by the Red Cross. As of today, he remains the only monarch in history to have ever received a nomination to a Nobel Prize.

grandfather of Juan Carlos I 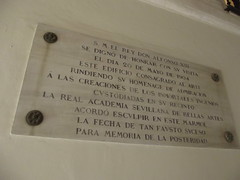