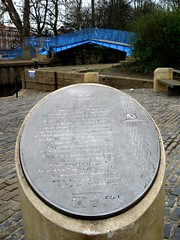 Blue Bridge. The first bridge built on this site in 1738 was a small wooden drawbridge painted blue. In 1767 it was replaced by a fixed stone bridge and again by a wooden 'Turning Bridge' in 1792, which allowed boats to proceed up the Foss. Another replacement in 1834 gave way to an iron lifting bridge built in 1858. The current bridge dates from 1929-30. Two platforms were erected at the St George's field end of the bridge to support two cannons captured at the Battle of Sebastopol in 1855. These formed the City's Crimean War Memorial. The metal guns were melted down during the Second World War.