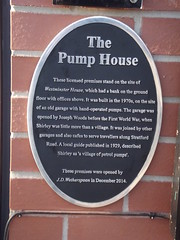 The Pump House These licensed premises stand on the site of Westminster House, which had a bank on the ground floor with offices above. It was built in the 1970s, on the side of an old garage with hand-operated pumps. The garage was opened by Joseph Woods before the First World War, when Shirley was little more than a village. It was joined by other garages and also cafes to serve travellers along Stratford Road. A local guide published in 1929, described Shirley as 'a village of petrol pumps'. These premises were opened by J.D. Wetherspoon in December 2014.