Lucy Morton (23 February 1898 – 26 August 1980), later known by her married name Lucy Heaton, was an English competition swimmer who represented Great Britain at the 1924 Summer Olympics and won a gold medal in the 200-metre breaststroke event. Morton was born in 1898 at New Tatton in Cheshire, her father Alfred was in domestic service as a groom. The family moved to Blackpool and by the age of 10 Morton had joined the local amateur swimming club. By 1920 Morton held the world record for the 200-yard breaststroke and in 1924 was chosen to be part of the British team at the 1924 Summer Olympics in Paris. Morton won the women's 200-metre breaststroke race, and became the first British woman to win an Olympic gold medal for swimming in an individual (non-relay) event. Morton retired from competitive swimming after the Olympics and married Harry Heaton in 1927. She continued supporting swimming events for the rest of her life serving as a competitors' steward when she was aged 72. She died in Blackpool in 1980. She was inducted posthumously into the International Swimming Hall of Fame as an "Honor Pioneer Swimmer" in 1988. 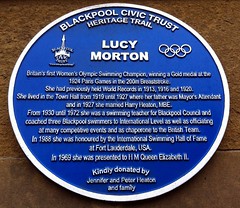 Lucy Morton Britain's first Women's Olympic Swimming Champion, winning a Gold medal at the 1924 Paris Games in the 200m Breastroke. She had previously held World Records in 1914, 1916 and 1920. She lived in the Town Hall from 1919 until 1927 where her father was Mayor's Attendant and in 1927 she married Harry Heaton, MBE. From 1930 until 1972 she was a swimming teacher for Blackpool Council and coached three Blackpool swimmers to International Level as well as officiating at many competitive events and as chaperone to the British Team. In 1988 she was honoured by the International Swimming Hall of Fame at Fort Lauderdale, USA. In 1969 she was presented to H M Queen Elizabeth II. Kindly donated by Jennifer and Peter Heaton and family.

Talbot Square, Blackpool, United Kingdom where they was