Alfred Waterhouse RA PPRIBA (19 July 1830 – 22 August 1905) was an English architect, particularly associated with the Victorian Gothic Revival architecture, although he designed using other architectural styles as well. He is perhaps best known for his designs for Manchester Town Hall and the Natural History Museum in London, although he also built a wide variety of other buildings throughout the country. Besides his most famous public buildings he designed other town halls, the Manchester Assize buildings—bombed in World War II—and the adjacent Strangeways Prison. He also designed several hospitals, the most architecturally interesting being the Royal Infirmary Liverpool and University College Hospital London. He was particularly active in designing buildings for universities, including both Oxford and Cambridge but also what became Liverpool, Manchester and Leeds universities. He designed many country houses, the most important being Eaton Hall in Cheshire, largely demolished in 1961-63. He designed several bank buildings and offices for insurance companies, most notably the Prudential Assurance Company. Although not a major church designer he produced several notable churches and chapels. He was both a member of The Royal Institute of British Architects, of which he served a term as President, and a Royal Academician, acting as Treasurer for the Royal Academy. Financially speaking, Waterhouse was probably the most successful of all Victorian architects. He designed some of the most expensive buildings of the Victorian age. The three most costly were Manchester Town Hall, Eaton Hall and the Natural History Museum all under construction during the 1870s. They were also among the largest buildings of their type built during the period. He also attracted loyal clients, often across decades. For example, the Mistresses of Girton College, who from the initial commission in 1871, kept returning to him for new phases in the building's construction until he retired. The same was true of the Prudential Assurance Company, from the first phase of their headquarters Holborn Bars in 1876. There are other examples, especially universities and colleges. Waterhouse had a reputation for being able to plan logically laid out buildings, often on awkward or cramped sites. He built soundly constructed buildings, having built up a well structured and organised architectural office, and used reliable sub-contractors and suppliers. His versatility in stylistic matters also attracted clients. Though expert within Neo-Gothic, Renaissance revival and Romanesque revival styles, Waterhouse never limited himself to a single architectural style. He often used eclecticism in his buildings. Styles that he used occasionally include Tudor revival, Jacobethan, Italianate, and some only one or two times such as, Scottish baronial architecture, Baroque Revival, Queen Anne style architecture and Neoclassical architecture. As with the architectural styles he used when designing his buildings, the materials and decoration also show the use of diverse materials. Waterhouse is known for the use of terracotta on the exterior of his buildings, most famously at the Natural History Museum. He also used faience, once its mass production was possible, on the interiors of his buildings. Such as the Victoria Building, University of Liverpool. But he also used brick, often a combination of different colours, or with other materials such as terracotta and stone. This was especially the case with his buildings for the Prudential Assurance Company, educational, hospital and domestic buildings. In his Manchester Assize Courts, he used different coloured stones externally to decorate it. At Manchester Town Hall and Eaton Hall the exterior walls are almost entirely of a single type of stone. His interiors ranged from the most elaborate at Eaton Hall and Manchester Town Hall, respectively for Britain's richest man and northern England's richest city cottonopolis, to the simplest in buildings like the Royal Liverpool Infirmary, where utility and hygiene dictated the interior design, and the even starker Strangeways Prison. 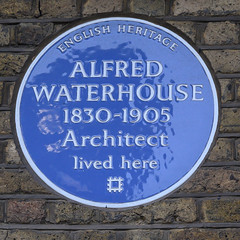 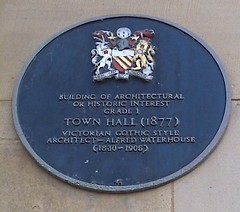 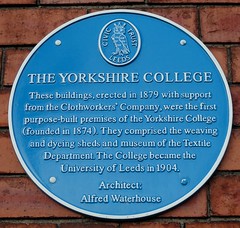 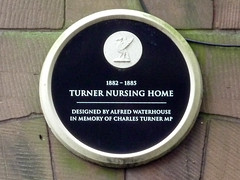 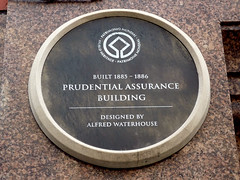 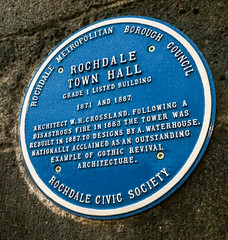 The Yorkshire College These buildings, erected in 1879 with support from the Clothworkers' Company, were the first purpose-built premises of the Yorkshire College (founded in 1874). They comprised the weaving and dyeing sheds and museum of the Textile Department. The College became the University of Leeds in 1904. Architect: Alfred Waterhouse

Rochdale Town Hall Grade I Listed Building 1871 and 1887 Architect W.H. Crossland. Following a disastrous fire in 1883 the tower was rebuilt in 1887 to designs by A. Waterhouse. Nationally acclaimed as an outstanding example of gothic revival architecture.

The Esplanade, Rochdale, United Kingdom where they designed

St Paul's School This house with attached lodge was built for the High Master of St Paul's when the school - founded next to St Paul's Cathedral - moved to Hammersmith in 1884. The architect was Alfred Waterhouse. The main school buildings were demolished after the school moved again - to Barnes - in 1968.