Katie Patterson is an Australian businesswoman and soccer referee. In September 2015, she became the first female to referee an A-League team in a competitive match, when she officiated the 2015 FFA Cup tie between Rockdale City Suns and Melbourne Victory at Jubilee Oval. 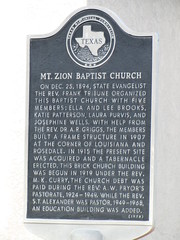 Mount Zion Baptist Church. On Dec. 25, 1894, State Evangelist the Rev. Frank Tribune organized this Baptist church with five members: Ella and Lee Brooks, Katie Patterson, Laura Purvis, and Josephine Wells. With help from the Rev. Dr. A. R. Griggs, the members built a frame structure in 1907 at the corner of Louisiana and Rosedale. In 1915 the present site was acquired and a tabernacle erected. This brick church building was begun in 1919 under the Rev. M. K. Curry. The church debt was paid during the Rev. A. W. Pryor's pastorate, 1924-1949. While the Rev. S. T. Alexander was Pastor, 1949-1968, an education building was added.