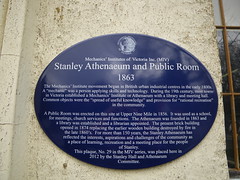 Stanley Athenaeum and Public Room. 1863. The Mechanics' Institute movement began in British urban industrial centres in the early 1800s. A "mechanic" was a person applying skills and technology. During the 19th century, most towns in Victoria established a Mechanics' Institute or Athenaeum with a library and meeting hall. Common objects were the "spread of useful knowledge" and provision for "rational recreation" in the community. The Public Room was erected on this site in Upper Nine Mile in 1856. It was used as a school, for meetings, church services and functions. The Athenaeum was founded in 1863 and a library was established and a librarian appointed. The present brick building opened in 1874 replacing the earlier wooden building destroyed by fire in the late 1860’s. For more than 150 years, the Stanley Athenaeum has reflected the interests, aspirations and challenges of the community as a place of learning, recreation and a meeting place for the people of Stanley. This plaque, No. 29 in the MIV series, was placed here in 2012 by the Stanley Hall and Athenaeum Committee.