Nicholas Barbon (c. 1640 – c. 1698) was an English economist, physician, and financial speculator. Historians of mercantilism consider him to be one of the first proponents of the free market. In the aftermath of the Great Fire of London, he became an active London property developer and helped to pioneer fire insurance and mortgages as a means of financing such developments. 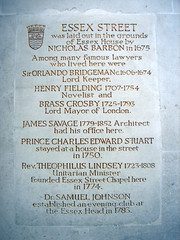