author and founder of The Inland Waterways Association

Robert Fordyce Aickman (27 June 1914 – 26 February 1981) was an English conservationist and writer of fiction and nonfiction. As a conservationist, he is notable for co-founding the Inland Waterways Association, a group which has preserved from destruction and restored England's inland canal system. As a writer, he is best known for his supernatural fiction, which he described as "strange stories". The writer of his obituary in The Times, as quoted by Mike Ashley, said, "... his most outstanding and lasting achievement was as a writer of what he himself like to call 'strange tales.' He brought to these his immense knowledge of the occult, psychological insights and a richness of background and characterisation which rank his stories with those of M.R. James and Walter de la Mare." Ashley himself wrote: "Aickman's writings are an acquired taste like fine wines. I have no doubt that his work will always remain unknown to the majority of readers, and perhaps he would have wanted it that way. He wrote what and how he wanted, for expression, not for popularity. In another of his letters to me he said 'I have received a good deal of esteem, but never a big commercial success, and am usually wondering whether anything by me will ever be published again.' ... It is astonishing that someone of Aickman's stature should have difficult in selling his work. Perhaps now, too late for Aickman's benefit, someone will have the sense to publish it." This situation has since been remedied by an extensive program of reprints of Aickman's work by Tartarus Press and Faber. 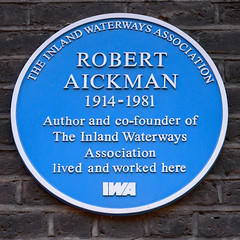 11 Gower Street, London, United Kingdom where they lived and worked