Richard Cobden (3 June 1804 – 2 April 1865) was an English Radical and Liberal politician, manufacturer, and a campaigner for free trade and peace. He was associated with the Anti-Corn Law League and the Cobden–Chevalier Treaty. As a young man, Cobden was a successful commercial traveller who became co-owner of a highly profitable calico printing factory in Sabden but lived in Manchester, a city with which he would become strongly identified. However, he soon found himself more engaged in politics, and his travels convinced him of the virtues of free trade (anti-protection) as the key to better international relations. In 1838, he and John Bright founded the Anti-Corn Law League, aimed at abolishing the unpopular Corn Laws, which protected landowners' interests by levying taxes on imported wheat, thus raising the price of bread. As a Member of Parliament from 1841, he fought against opposition from the Peel ministry, and abolition was achieved in 1846. Another free trade initiative was the Cobden-Chevalier Treaty of 1860, promoting closer interdependence between Britain and France. This campaign was conducted in collaboration with John Bright and French economist Michel Chevalier, and succeeded despite Parliament's endemic mistrust of the French. 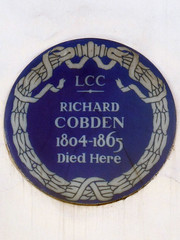 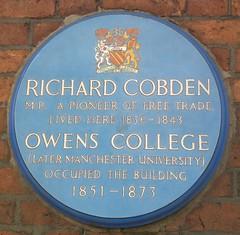