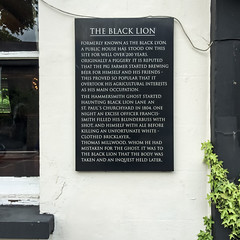 Formerly known as the Black Lyon, a public house has stood on this site for well over 200 years. Originally a piggery it is reputed that the pig farmer started brewing beer for himself and his friends - this proved so popular that it overtook his agricultural interests as his main occupation. The Hammersmith Ghost started haunting Black Lion Lane an (sic) St. Paul's churchyard in 1804. One night an excise officer Francis-Smith filled his blunderbuss with shot, and himself with ale before killing an unfortunate white-clothed bricklayer, Thomas Millwood, whom he had mistaken for the ghost. It was to the Black Lion that the body was taken and an inquest held later.