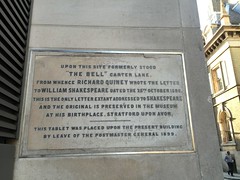 Upon this site formerly stood "The Bell" Carter Lane. From whence Richard Quiney wrote the letter to William Shakespeare dated 25th October 1598. This is the only letter extant addressed to Shakespeare and the original is preserved in the museum at his birthplace, Stratford Upon Avon. This tablet was placed upon the present building by leave of the Postmaster General 1899.