Michael Emile Telford Miller (16 October 1937 – 11 April 2016), known professionally as Emile Ford, was a musician and singer born in Saint Lucia, British Windward Islands. He was popular in the United Kingdom in the late 1950s and early 1960s as the leader of Emile Ford & the Checkmates, who had a number one hit in late 1959 with "What Do You Want to Make Those Eyes at Me For?" He was also a pioneering sound engineer. 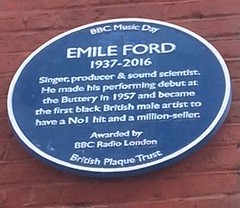 Emile Ford 1937-2016 singer, producer & sound scientist. He made his performing debut at the Buttery in 1957 and became the first black British male artist to have a No.1 hit and a million-seller