Nancy Witcher Langhorne Astor, Viscountess Astor, CH (19 May 1879 – 2 May 1964) was an American-born British politician who was the first woman seated as a Member of Parliament (MP), serving from 1919 to 1945. Astor's first husband was American Robert Gould Shaw II; the couple separated after four years and divorced in 1903. She moved to England and married Waldorf Astor. After her husband succeeded to the peerage and entered the House of Lords, she entered politics as a member of the Conservative Party and won his former seat of Plymouth Sutton in 1919, becoming the first woman to sit as an MP in the House of Commons. She served in Parliament until 1945, when she was persuaded to step down. Astor has been criticised for her antisemitism and sympathetic view of Nazism. 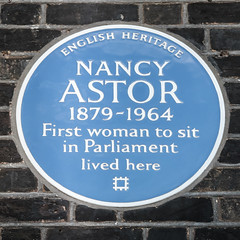