Hardy Falconer Parsons VC (13 June 1897 – 21 August 1917) was an English recipient of the Victoria Cross, the highest and most prestigious award for gallantry in the face of the enemy that can be awarded to British and Commonwealth forces. He was born in Rishton, Lancashire, the son of the Reverend James Ash Parsons and Henrietta Parsons, of Leysian Mission, City Road, London. He was educated at King Edward VII School, Lytham St Annes, Kingswood School, Bath, and as a medical student at the University of Bristol, preparing for medical missionary work. A commemorative stone was unveiled in his hometown of Rishton on 21 August 2017 at the town's war memorial to mark 100 years since he died. As he was a Bristol University medical student, a blue plaque on his former residence was also unveiled in 2017. 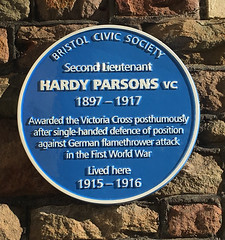