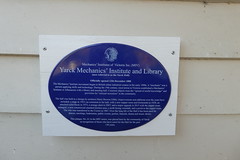 Yarck Mechanics' Institute and Library (now referred to as the Yarck Hall). Officially opened 12th December 1888. The Mechanics' Institute movement began in British urban industrial centres in the early 1800s. A "mechanic" was a person applying skills and technology. During the 19th century, most towns in Victoria established a Mechanics' Institute or Athenaeum with a library and meeting hall. Common objects were the "spread of useful knowledge" and provision for "rational recreation" in the community. The hall was built to a design by architect Harry Browse Gibbs. Improvements and additions over the years have included: a stage in 1923; an extension to the hall, with a new supper room and kitchenette in 1938; an attached toilet block in 1973; a storage shed in 2007; and a major upgrade in 2015 with the supper room enlarged, a new commercial standard kitchen area, a north facing verandah, and a porch to the supper room. The title was transferred to the Crown in 1967. Over the long life of the Hall it has been used for dances, meetings, badminton, public events, parties, funerals, drama and music shows. This plaque, No. 61 in the MIV series, was placed here by the community of Yarck in recognition of those who have cared for the Hall for the past 130 years.

Maroondah Highway, Yarck, Victoria, Australia where it was