Birmingham, Its people, Its History is a permanent exhibition at Birmingham Museum and Art Gallery and is also unofficially known as the Birmingham History Galleries. It opened to the public in October 2012 and is located on the third floor of the museum covering an area of 1,040 square metres. The exhibition is divided into five galleries which explore the story of Birmingham, England, and its people over a period of 900 years, from the 12th century to the present day. Over 1,500 objects are displayed from the museum’s designated collections, many of which can be seen on the museum's Flickr account. The £8.9m capital development was principally funded by the Heritage Lottery Fund, but other funders also include Arts Council England, The Wolfson Foundation and Birmingham City Council. The galleries were designed by Redman Design of Ilkley, Yorkshire, in collaboration with the curatorial department at Birmingham Museum and Art Gallery. 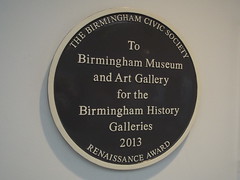