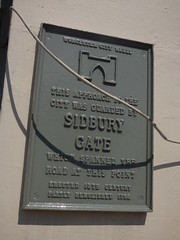 The last battle of the Civil War was fought at Worcester on 3rd September 1651 It is for aught I know a crowning mercy Oliver Cromwell Near this spot in the City Wall stood the Sidbury Gate, which was stormed by the Parliamentarian troops. Erected by the Cromwell Association and Worcester City Council with the aid of public subscription 1993

On the canal bridge near The Commandery - Sidbury, Worcester, United Kingdom where it was

The King's Head - Sidbury, Worcester, United Kingdom where it was partly demolished (1768)

Worcester City Walls Sidbury Gate Built before 1197, and demolished by public subscription in 1768. One of the main city gates, it guarded the roads to London and Gloucester. Part of the northern gate tower was rediscovered in 1907 and is presereved in the cellar below this building. After the fall of Fort Royal during the battle of Worcester, Sidbury Gate was held by the royalists allowing Charles II to escape from the city. Sponsored by John, Lorna, Anthony and James Eden