Duncan James Corrowr Grant (21 January 1885 – 8 May 1978) was a British painter and designer of textiles, pottery, theatre sets and costumes. He was a member of the Bloomsbury Group. His father was Bartle Grant, a "poverty-stricken" major in the army, and much of his early childhood was spent in India and Burma. He was a grandson of Sir John Peter Grant, 12th Laird of Rothiemurchus, KCB, GCMG, sometime Lieutenant-Governor of Bengal. Grant was also the first cousin twice removed of John Grant, 13th Earl of Dysart (b. 1946). 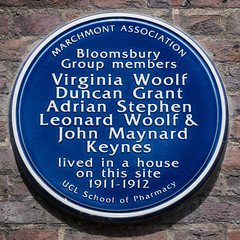 38 Brunswick Square, London, United Kingdom where they was