Robert George "Joe" Meek (5 April 1929 – 3 February 1967) was an English record producer and songwriter who pioneered experimental pop music and assisted the development of recording practices like overdubbing, sampling and reverb. He is best remembered for writing and producing the Tornados' instrumental "Telstar" (1962), which became the first record by a British group to reach number one in the US Hot 100. It also spent five weeks at number one in the UK singles chart, with Meek receiving an Ivor Novello Award for this production as the "Best-Selling A-Side" of 1962. Meek's other charting singles include "Johnny Remember Me" (John Leyton, 1961), "Just Like Eddie" (Heinz, 1963), "Angela Jones" (Michael Cox, 1963), "Have I the Right?" (the Honeycombs, 1964), and "Tribute to Buddy Holly" (Mike Berry, 1961). He also produced music for films such as Live It Up! (US title Sing and Swing, 1963), a pop music film which featured Gene Vincent, the Outlaws pop group, jazz musician Kenny Ball and others. Meek's concept album I Hear a New World (1960), which contains innovative use of electronic sounds, was not fully released in his lifetime. His reputation for experiments in recording music was acknowledged by the Music Producers Guild who in 2009 created "The Joe Meek Award for Innovation in Production" as an "homage to [the] remarkable producer's pioneering spirit". In 2014, Meek was ranked the greatest producer of all time by NME, elaborating: "Meek was a complete trailblazer, attempting endless new ideas in his search for the perfect sound. ... The legacy of his endless experimentation is writ large over most of your favourite music today." At the time of his death, Meek possessed thousands of unreleased recordings later dubbed "The Tea Chest Tapes". His commercial success as a producer was short-lived, and he gradually sank into debt and depression. On 3 February 1967, using a shotgun owned by musician Heinz Burt, Meek killed his landlady Violet Shenton and then shot himself. 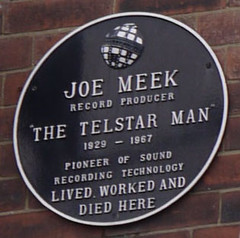 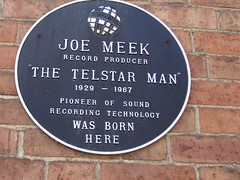 1 Market Square, Newent, United Kingdom where they was born (1929)

Bench outside 304 Holloway Road, N7., London, United Kingdom where they lived near