Sherlock Holmes (/ˈʃɜːrlɒk ˈhoʊmz/) is a fictional detective created by British author Sir Arthur Conan Doyle. Referring to himself as a "consulting detective" in the stories, Holmes is known for his proficiency with observation, deduction, forensic science and logical reasoning that borders on the fantastic, which he employs when investigating cases for a wide variety of clients, including Scotland Yard. First appearing in print in 1887's A Study in Scarlet, the character's popularity became widespread with the first series of short stories in The Strand Magazine, beginning with "A Scandal in Bohemia" in 1891; additional tales appeared from then until 1927, eventually totalling four novels and 56 short stories. All but one are set in the Victorian or Edwardian eras, between about 1880 and 1914. Most are narrated by the character of Holmes's friend and biographer Dr. John H. Watson, who usually accompanies Holmes during his investigations and often shares quarters with him at the address of 221B Baker Street, London, where many of the stories begin. Though not the first fictional detective, Sherlock Holmes is arguably the best known. By the 1990s, there were already over 25,000 stage adaptations, films, television productions and publications featuring the detective, and Guinness World Records lists him as the most portrayed literary human character in film and television history. Holmes's popularity and fame are such that many have believed him to be not a fictional character but a real individual; numerous literary and fan societies have been founded on this pretence. Avid readers of the Holmes stories helped create the modern practice of fandom. The character and stories have had a profound and lasting effect on mystery writing and popular culture as a whole, with the original tales as well as thousands written by authors other than Conan Doyle being adapted into stage and radio plays, television, films, video games, and other media for over one hundred years. 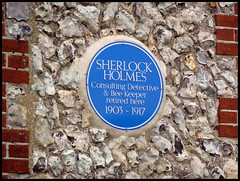 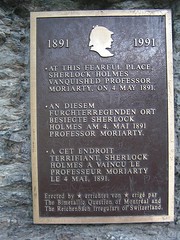 At this place New Years Day, 1881 were spoken these deathless words "You have been to A...
London, United Kingdom

221b Baker Street, London, United Kingdom where they lived

At this place New Years Day, 1881 were spoken these deathless words "You have been to Afghanistan, I perceive." by Mr Sherlock Holmes in greeting to John H. Watson M.D. at their first meeting

St. Bartholomews Hospital, West Smithfield, London, United Kingdom where they spoke these deathless words 'You have been to Afghanistan, I perceive' (1881) and first met (1881)

The black swan above you is a replica of one which once adorned the Black Swan Hotel that stood on this site from the 19th century until 1935 when the hotel was demolished and replaced by the Black Swan Buildings. The Black Swan Hotel was "visited" by Sherlock Holmes and Dr Watson in Sir Arthur Conan Doyle's "The Adventure of the Copper Beeches".