Stephen Peter Marriott (30 January 1947 – 20 April 1991) was an English musician, songwriter and frontman guitarist of rock bands Small Faces (1965–1968 and 1975–1978) and Humble Pie (1969–1975 and 1979–1983), spanning over two decades. Marriott was inducted posthumously into the Rock and Roll Hall of Fame in 2012 as a member of Small Faces. In Britain, Marriott became a popular, often-photographed mod style icon. Marriott was influenced from an early age by his heroes including Buddy Holly, Booker T & the MG's, Ray Charles, Otis Redding, Muddy Waters and Bobby Bland.In later life Marriott became disillusioned with the music industry and turned his back on the big record companies, remaining in relative obscurity. He returned to his music roots playing the pubs and clubs around London and Essex. Marriott died on 20 April 1991 when a fire, which was thought to have been caused by a cigarette, swept through his 16th century home in Arkesden, Essex. He posthumously received an Ivor Novello Award in 1996 for his Outstanding Contribution to British Music, and was listed in Mojo as one of the top 100 greatest singers of all time. Black Sabbath frontman Ozzy Osbourne named Marriott the fourth greatest singer ever and Clem Burke of Blondie ranked him the sixteenth. Paul Stanley of Kiss called Marriott "unbelievable" and a hero of his, while Steve Perry of Journey named him one of his favourite singers. 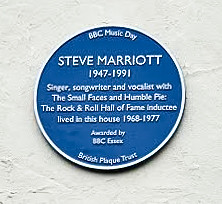 Steve Marriott 1947-1991 Singer, songwriter and vocalist with The Small Faces and Humble Pie: The Rock and Roll Hall of Fame Inductee lived in this house 1968 - 1977 Awarded by BBC Essex