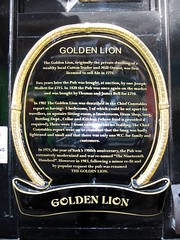 Golden Lion. The Golden Lion, originally the private dwelling of a wealthy local Cotton Trader and Mill Owner, was first licensed to sell Ale in 1771. Two years later the Pub was bought, at auction, by one Joseph Mollett for £715. In 1828 the Pub was once again on the market and was bought by Thomas and James Bell for £710. In 1902 The Golden Lion was described in the Chief Constables report as having:- 5 bedrooms, 3 of which could be set apart for travellers, an upstairs Sitting-room, a Smokeroom, Dram Shop, Snug, Bottling Dept., Cellar and Kitchen (where food is provided if required). There were 3 front entrances but no Stabling. The Chief Constables report went to comment that the Snug was badly lightened and small and that there was only one W.C. for family and customers. In 1971, the year of York's 1900th anniversary, the Pub was extensively modernised and was re-named "The Nineteenth Hundred". However in 1983, following a minor re-fit and by popular request the pub was renamed The Golden Lion.