Radio Luxembourg was a multilingual commercial broadcaster in Luxembourg. It is known in most non-English languages as RTL (for Radio Television Luxembourg). The English language service of Radio Luxembourg began in 1933 as one of the earliest commercial radio stations broadcasting to Ireland and Britain. It was an important forerunner of pirate radio and modern commercial radio in the United Kingdom. It was an effective way to advertise products by circumventing British legislation which until 1973 gave the BBC a monopoly of radio broadcasting on UK territory and prohibited all forms of advertising over the domestic radio spectrum. It boasted the most powerful privately owned transmitter in the world (1,300 kW broadcasting on medium wave) in the late 1930s, and again in the 1950s and 1960s, it captured very large audiences in Britain and Ireland with its programmes of popular entertainment. Radio Luxembourg's parent company, RTL Group, continued broadcasts to the UK until July 2010 as the owners of the British TV channel Five. 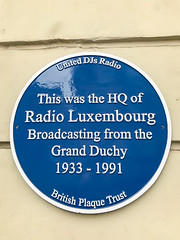 This was the HQ of Radio Luxembourg. Broadcasting from the Grand Duchy 1933-1991

38 Hertford Street, London, United Kingdom where it was headquartered