Sir Charles Wentworth Dilke, 2nd Baronet, PC (4 September 1843 – 26 January 1911) was an English Liberal and Radical politician. A republican in the early 1870s, he later became a leader in the radical challenge to Whig control of the Liberal Party, making a number of important contributions, including the legislation increasing democracy in 1883–1885, his support of the growing labour and feminist movements and his prolific writings on international affairs. Touted as a future prime minister, his aspirations to higher political office were effectively terminated in 1885 after a notorious and well-publicised divorce case. His disgrace and the alignment of Joseph Chamberlain with the Conservatives both greatly weakened the radical cause. 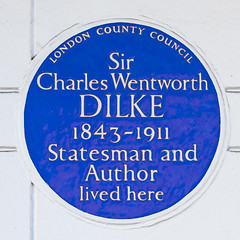