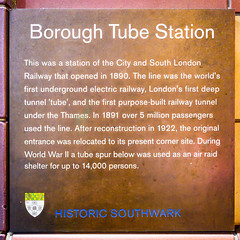 Borough Tube Station This was a station of the City and South London Railway that opened in 1890. The line was the world's first underground electric railway, London's first deep tunnel 'tube', and the first purpose-built railway tunnel under the Thames. In 1891 over 5 million passengers used the line. After reconstruction in 1922, the original entrance was relocated to its present corner site. During World War II a tube spur below was used as an air raid shelter for up to 14,000 persons.

Borough High Street, London, United Kingdom where it was