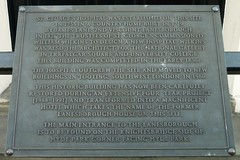 St. George's Hospital was established on this site in 1733 in a country home built in 1719 by James Lane, 2nd Viscount Lanesborough. In 1826 the trustees of St George's commissioned William Wilkins to design a new hospital. Wilkins was also the architect for the National Gallery in Trafalgar Square and University College. This building was completed in the early 1830s. The hospital outgrew the site and moved to new buildings in Tooting, southwest London, in 1980. This historic building has now been carefully restored during an extensive four year project (1988-1991) and transformed into a magnificent hotel which takes the name of the former Lanesborough House on this site. The main entrance to the Lanesborough is to be found on the Knighstbridge side of Hyde Park Corner facing Hyde Park.

Hyde Park Corner, London, United Kingdom where they was