The Hogarth Press was a British publishing house founded in 1917 by Leonard Woolf and Virginia Woolf. It was named after their house in Richmond (then in Surrey and now in London), in which they began hand-printing books. During the interwar period, the Hogarth Press grew from a hobby of the Woolfs to a business when they began using commercial printers. In 1938 Virginia Woolf relinquished her interest in the business and it was then run as a partnership by Leonard Woolf and John Lehmann until 1946, when it became an associate company of Chatto & Windus. As well as publishing the works of the members of the Bloomsbury group, the Hogarth Press was at the forefront of publishing works on psychoanalysis and translations of foreign, especially Russian, works. In 2011, Chatto & Windus, then owned by Random House, relaunched Hogarth in partnership with Crown Publishing Group, an American sister division of Random House. 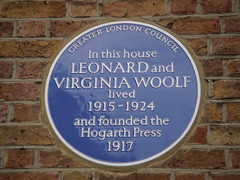 Hogarth House, 34 Paradise Road, Richmond Upon Thames, London, United Kingdom where it was